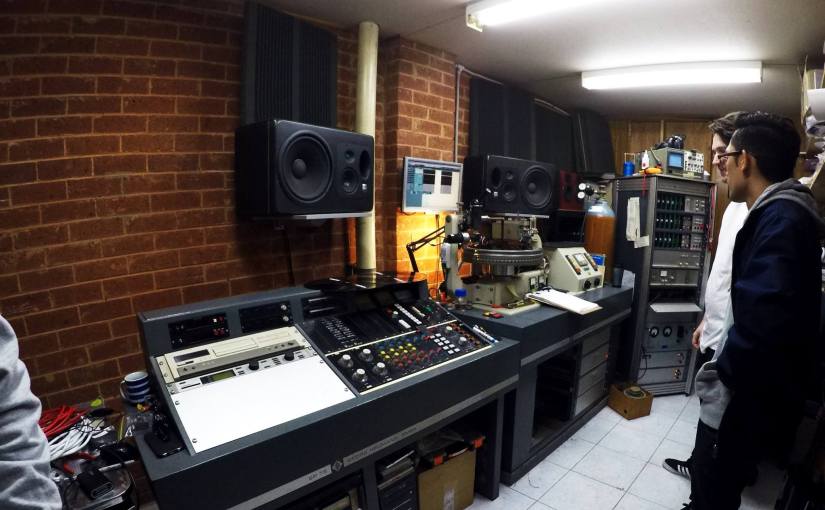 From tape to vinyl this semester has been an absolute blast. On a personal note this has been one of my favorite trimesters of the course so far. I started the semester with mastering, this… well, was something had absolutely no clue about and for sure was very interested in learning. Mastering  known as the dark art is something I knew very little about … nothing more than a pre-set on izotope. But what I found was the easiest way to learn the “proper” way of mastering was to strip it back right to the basics. For me the mastering unit not only thought me how to master but rather gave me a better understanding of how compressors and limiters work and has definitely given me the confidence in jumping on and mastering tracks should it need be done.

The next intensive was the studio unit. This was undoubtedly the most fun unit of the course. The requirements was short and sweet, pick a producer and does a cover song in the styles of that producer! For this my choice of producer was Paul Epworth. Producer of many multi-platinum songs and albums from artists such as Adele, Maroon 5 and Bruno Mars. For this project I picked the song from the movie Grease titled “You’re the one that I want” and turned it into a big sounding ballad something in the likes of the vibe of Adele’s new album “25”. This actually turned out so much better than I expected it to be and I was defiantly happy with its outcome. For me I learnt a heap of new mixing techniques with the help of my lecturer specially of how to get a really nice sounding analogue and digital “hybrid” mix.

The next sector of study was post production. As much as I love watching movies, post production I have come to learn is not my thing…. Having come from a background of music both studio and live I have grown up to like the fast moving and the creative processes. Although I have immense respect for Foley and post production for the amount of work they put into making. Although this wasn’t my forte I did learn that having a template for post production and developing a work flow that works well is very important

Another important section of this trimester and this units requirements was freelance work. For this trimester I have done 4 projects apart from the work done in class. One of the biggest one I did was a song titled “Awasara Illami” for a Sri Lankan artist Shehan De Silva who was in Melbourne on vacation and wanted to produce a song and contacted me. The song was initially planed to be release independently although later on went on to be signed by one of Sri Lanka’s biggest labels.

The next project I did was something I thought I’d challenge myself to do although I have found that my strong point is not post production Audio I thought I’d put myself in the deep end and mix a film for a final project of a trimester 5 film student at SAE Titled “Hardened”. Although I was not not too happy with the outcome It was most certainly a massive learning curve and I did push me to the limits.

Another project I did this trimester was a mix for a jingle / advert for a promotional video by the Old joes Choir. The raw files of the project were sent to me and I was asked if could mix the track.  It was rather interesting as I was also asked to give the track an effect as it were recorded on vinyl. I also mixed two tracks this semester for a Melbourne based electronic duo “Uncle Bobby” the tracks were recorded live at the SAE open day which I then went on to mix and master as well.

For me the highlight of this trimester was the off campus projects. I have always been a fan of old school gear and this trimester was full of it from the chemical lab like vinyl pressing plant to working on tape it was an “absolute blast”. Having heard about audio tape on interviews of famous engineers a million times getting to work hands on with it was very thrilling. Not only the fact that we recorded on tape but the whole vibe of Sound park studios was amazing. From getting hands on with some of the best gear in the industry to seeing hearing how you do not really need fancy calibrated rooms to get good sounding audio was for sure eye opening.

The next outing to Zenith Records was truly amazing too. It truly makes you respect the art of pressing vinyl after seeing what enormous effort goes into pressing a single vinyl from granules to full pressed portable music. But for me the most interesting part was the cutting room. There is something about old equipment with one of a kind serial numbers that gets the blood pumping. As well as to see the detailed process of actually transferring the audio on to the disk.

This trimester has been an absolute blast and was sure loads of fun . It was for sure a good break from the serious stuff to come in the trimester next and for sure thought me loads!!!!